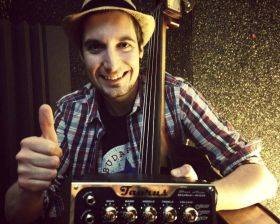 Jordi Vendrell is an electric and double bass player born in Tarragona (Catalonia) in 1985. At the early age of 8 he began studying classical music at the “Conservatori de Música de Tarragona”, playing the clarinet. At 15, he started to become interested in modern music, and his father bought him his first electric bass. After that, he became more and more interested in rock, funk and modern

music, which led him to pursue a professional music degree at the “Conservatori Superior del Liceu” in Barcelona. Later, as he moved into the world of jazz, he decided to study the double bass as well.Jordi got his undergraduate degree in Jazz and Modern Music in 2010, and the following year he began his Master’s degree in Music Education. Jordi is a multifaceted musician; he plays the piano, the guitar, the clarinet, the electric bass, the double bass, etc. He’s a talented singer and songwriter as well. Today, he plays gigs regularly with several different bands (Lucas Masciano, Zapping Trio, Trending Topic trio and others). He’s a music producer at his own studio, “Yuri She Productions”, as well as being a music instructor, teaching everything from electric bass and double bass to music production and modern harmony.

“I usually play a lot of different styles (rock, pop, jazz, funk, etc.) with several different bands. I needed an amp with a versatile sound, and also great sound and power. I also really had to have something that I could plug my double bass in to (with a pickup) and have it sound very natural. Every one of my expectations was met when I turned on my Taurus QUBE-450 for the first time. It has everything I wanted.”